The Capacity Based Markup Workbook

How To Calculate Your Hourly Rate As A Contractor 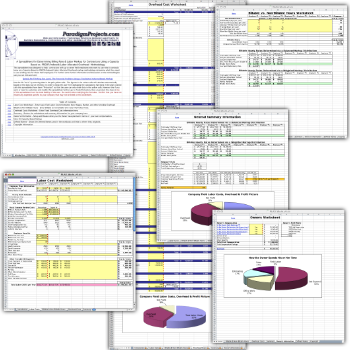 The Capacity Based Markup Workbook is an Excel Workbook that can be used by contractors or any business person for that matter that needs to figure out accurate hourly billing rates for themselves and their personal. While the workbook is designed and distributed for SMBs (Small & Mid-sized Businesses) with only 7 employees it is unlocked and can be easily modified for companies with more employees by anyone with basic Excel skills (and if you need help with that you can always contact us too).

What is Capacity Based Markup? There are essentially only two ways markup costs to recover for Overhead (and Net Profit) that I know of. In one of those methods, the driver is what kind of dollar volume you estimate or project your company can generate in a year and then markup the combined total of the Direct Job Costs to get a Sales Price for the job.

But there are problems with this method that would really throw off your ability to consistently recover Overhead and Net Profit when you encounter projects that have different mixes or ratios of your company’s Labor to Material and Subcontracting costs. Using that method described above (often called a Volume Based Markup or Margin Based Markup) with a project that has a High Relative Cost of Labor to Low Cost of Materials, and SubContracting you will be underpriced. And with a project with a Low Relative Cost of Labor to High Cost of Materials, and SubContracting you will be overpriced and probably not get the job. To learn how that works out read my blog article: Comparing Markup Methodologies In Real Some World Pricing Scenarios to see how the numbers work out.

On the other hand Capacity Based Markup is based on how many billable hours your company personnel can generate in a year, a number that is much more accurately estimated than your Sales Volume. After calculating the number of billable hours you have in a year you then know you need to recover your Overhead Costs with those billable hours. Your Labor Cost times your Capacity Based Markup rate then gives you a Loaded Labor Rate and your formula for computing a Sales Price then looks like:

…and for any projects that require you to provide Materials and Subcontractors you extend that formula to be:

I originally created this Workbook as part of discussions in the Journal of Light Construction Online Forums back in the winter of 2004 regarding the use of what is known as a Capacity Based Based Markup also sometimes known as PROOF or Indexed or Labor Allocated Overhead markup. I gave the original file the working name of PILAO_Wksht_vx.xx an acronym for the worksheet that some JLC forum old-timers still call it.

The Capacity Based Markup Worksheet works by allowing the user to enter all the real or estimated overheads costs into the proper categories for allocation distribution (Fixed and Variable Overhead) and then using those figures to calculate an appropriate Loaded Labor Rate  for each individual employee.

The Worksheets in the Workbook

The Introduction Worksheet provides a basic overview of the spreadsheet’s framework and navigation links to the individual worksheets. 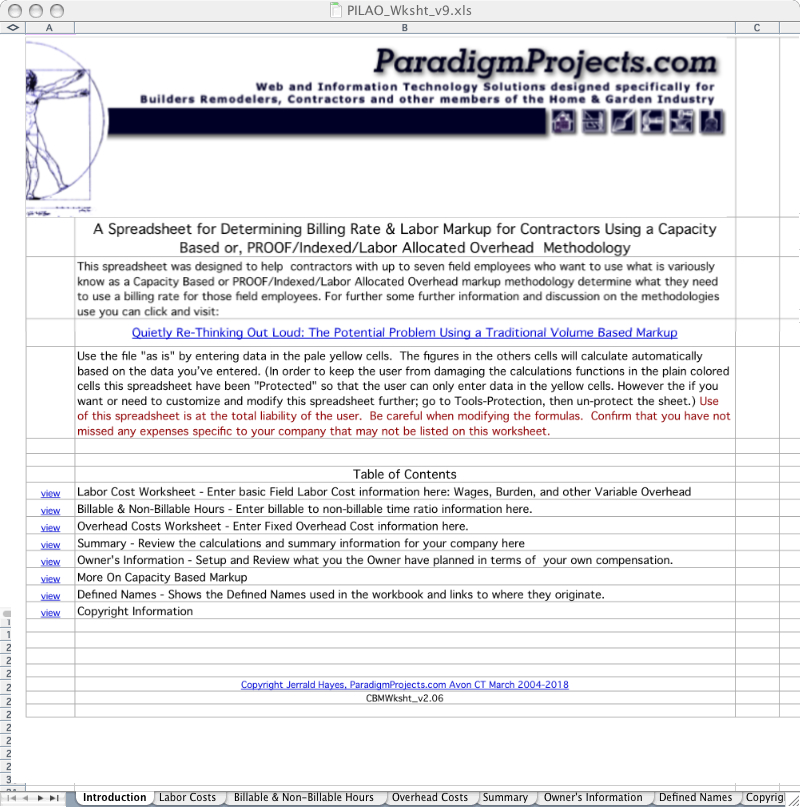 With the Labor Cost Worksheet in the yellow shaded data entry cells you set the wage rates, and then the costs that make up your  Labor Burden i.e. the employer costs such as benefit costs, and other miscellaneous Variable Overhead expenses you want to cover such as car and/or truck payments, vehicle maintenance, small tools, etc.

The Billable vs. Non-Billable Hours Worksheet

On the Billable vs. Non-Billable Worksheet you account for items such as paid holidays vacation time, training, downtime and other non-billable but paid hours that you and your employees will generate.

With the fixed Overhead Worksheet you enter you cost or budgets for all of your Fixed Overhead items such as Capital Tools, General Office Expenses, Marketing, Insurance , Professional Fees, Local & Regional Business Taxes., Loan Payments, Contingency, Owners Compensation, Sales Cost and the Net Profit you want your business to generate.

The General Summary Information Worksheet displays the calculated Labor Billing Rates for you and your employees along with a breakdown based on all of the entered data as to what your costs and projected Net Profit are per employee and/or per hour, per day, per week, per month or per year.

And after setting up and answering the questions in the yellow shaded cells the Owners Information Worksheet displays the Owner’s Compensation package based on all the data entered.

The Capacity Based Markup Worksheet Only $30.00

Click to Purchase Securely Using Stripe In Our Store

After you receive your email with the download link click on the link and look in your computer’s download folder for the file named “CBMWksht_vX.XX”.  The make a duplicate of it so you have a backup copy you can always revert to and then customize it based on your company’s budget numbers and personnel.

Licensed users of the Capacity Based Markup Worksheet will also receive free upgrades to any revisions whenever they become available. Just check back in from time to time to see if we have made any revisions then email us with your request.

Well, you could but you really shouldn’t. You will still have to replace the item someday so you need to plan for that recoupment cost now and not when it comes up which might very well me and ambush or emergency situation. For more on the thinking behind the subject:

In a Balanced Markup Distribution, each production employee is marked up the same uniform amount of dollars on top of their cost. In other words is I have three productive billable employees and one costs $20 per hour, one $30 per hour, and one $40 per hour I would add let’s say $28 per hour to their cost to come up with their loaded rate. The $20 per hour employee would bill at $20 + $28 = $48 per hour. The $30 per hour employee would bill at $30 + $28 = $58 per hour and the $40 per hour employee would bill at $40 + $28 = $68 per hour.I don’t really recall why I have that calculation in there in that I don’t support nor can I think of any reasoning why markup should necessarily be recovered that way. The only explanation for why I have it in there was it answered somebody’s request for it or came out the online discussion of workbook when I was first developing it back in 2004.With the Weighted Mark-up Distribution, the markup is applied as a percentage of the productive billable employee’s cost and is in my mind more representative of the value that particular employee would deliver.
For what it is worth though both methods are actually okay and in practice often very close to each other. The REAL OBJECT of figuring out an appropriate markup to use with your company’s employees is to come up with “a billing rate schedule that is approximately or mostly correct, rather than absolutely wrong”.

Can the WorkBook Be Used With Apple Numbers?

Yes, the Workbook can be used with Apple’s Numbers but when you convert the file you lose the tab-based sheet navigation but perhaps even more importantly Apple’s Numbers doesn’t support cell or sheet protection so it then possible to damage or break the functions if you’re not carefully using it.

As much as I love Apple Computers (I am a lifetime Mac user) Microsoft’s Excel is a far far superior product and if you are a committed spreadsheet user I recommend switching to Excel.

Why does the workbook have a .xls extension and not a .xlsx extension?

The default filename extension Microsoft Excel gave to new spreadsheets prior to Excel 2007 was .xls and we keep it that way for the sake of backward compatibility for users with older versions of Excel and users with Apple’s Numbers.

We Offer a Complimentary Initial Consultation: In our initial meeting we learn more about you and your specific goals and desires. We explain our programs and together we determine which ones might be appropriate for you. If we decide to work together, we will provide you with a proposal outlining our fees and services and you’ll provide us with a small retainer to begin working on your project.
Take Action, Contact Us →